Ricky has always been a natural performer, beginning his training from a young age, at the Constance Grant School of Dance. There, he trained to a high level in tap, ballet, modern, jazz and ballroom. Ricky was also involved in many professional theatre productions including, “Oliver” and “Great Expectations” at the Lyceum Theatre, Sheffield plus many more. This lead to T.V credits such as co presenting with Philipa Forester for the BBC’s “Broom Cupboard”.
Ricky then moved into the world of variety entertainment by joining the world famous Butlin’s Redcoats. Here, Ricky’s talent shone through and he was quickly recognised as an all round entertainer.
Ricky was soon head hunted by Premiere International, who flew him out to Europe to perform as a vocalist and dancer in 5* hotels. During his time away, Ricky began creating his one man show and interjected his own brand of comedy into his performance. On his return to the UK he began touring up and down the country performing his show. This led to him being asked to perform at the “ Horseshoe Bar” in Blackpool for the “Command Awards”. Here he was presented with Best all round act.
Since then Ricky has gone from strength to strength, honing his skills as an all round entertainer, constantly writing visual routines, paraodies and observational comedy. Ricky has had the pleasure to perform for many corporate companies such as “Orange”, “O2”, “DFS”, ‘Hilton’ to name a few. Also performing for leading Travel companies, such as ‘Thomson’, ‘First Choice’, ‘Sensatori’, ‘P&O’, and ‘Royal Caribbean’. To add to this Ricky has performed in many Prestigeous venues around the U.K.
This year, Ricky auditioned for Britain’s Got Talent with his self penned routine ‘The Fairytale Of Love” which had a massive global response. From 75,000 he made it to the last 45 which saw him go through to the live semi-finals. 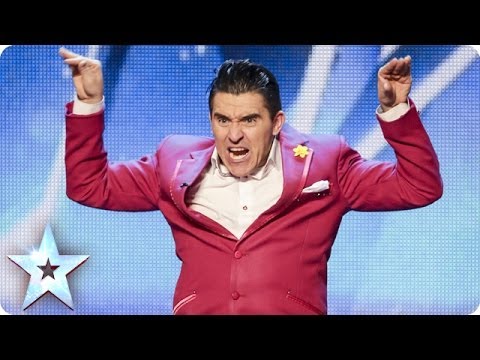